Eighteenth Sunday after Pentecost Year B

A capable wife who can find?

She is far more precious than jewels.   11 The heart of her husband trusts in her, and he will have no lack of gain.   12 She does him good, and not harm, all the days of her life.   13 She seeks wool and flax and works with willing hands.   14 She is like the ships of the merchant, she brings her food from far away.   15 She rises while it is still night and provides food for her household and tasks for her servant-girls.   16 She considers a field and buys it; with the fruit of her hands she plants a vineyard.   17 She girds herself with strength and makes her arms strong.   18 She perceives that her merchandise is profitable.  Her lamp does not go out at night.   19 She puts her hands to the distaff, and her hands hold the spindle.   20 She opens her hand to the poor and reaches out her hands to the needy.   21 She is not afraid for her household when it snows, for all her household are clothed in crimson.   22 She makes herself coverings; her clothing is fine linen and purple.  23 Her husband is known in the city gates, taking his seat among the elders of the land.   24 She makes linen garments and sells them; she supplies the merchant with sashes.   25 Strength and dignity are her clothing, and she laughs at the time to come.   26 She opens her mouth with wisdom, and the teaching of kindness is on her tongue.   27 She looks well to the ways of her household and does not eat the bread of idleness.   28 Her children rise up and call her happy; her husband too, and he praises her:  29 “Many women have done excellently, but you surpass them all.”   30 Charm is deceitful, and beauty is vain, but a woman who fears the LORD is to be praised.   31 Give her a share in the fruit of her hands, and let her works praise her in the city gates.

As Lemuel means devoted or close to God, and as this chapter concludes the Book of Proverbs, it is probably best to see the passage depicting an ideal King and his wife.  It is a glimpse of the exercising of Godly authority.  If we universalise this passage by seeing it describing the household of God, then everyone is a part of the king’s household and this is a model for all households, irrespective of the gender of the person caring for the household.

Although many feminists might challenge this passage on some levels, a deeper analysis leads to a critique of modern feminism as well. Irrespective of gender, the hierarchy of the household raises questions about human equality.

Many forms of modern feminism seem to be about the right of elite women, based on something that is unique to being female, to have the same rights as elite men in what is an unjust and inequitable social system beyond discrimination by gender.  The question as to whether there are essential qualities, apart from our biology, that we can attribute to masculinity and femininity, is one we need to continue to reflect upon in the light of God creating us in God’s image and likeness, both male and female.

In terms of equity, this last chapter of the book of Proverbs emphasises the importance of care and advocacy for the marginalised and proper care of the servants. In modern social terms we might say, proper care of employees.

The importance of equity is emphasised throughout the letter of James and also in today’s gospel passage where Jesus says whoever wants to be greatest must be servant of all.  This teaching of Jesus seems to have little consideration in our social structures and discourse.

Not many of you should become teachers, my brothers and sisters,1  for you know that we who teach will be judged with greater strictness. 2 For all of us make many mistakes. Anyone who makes no mistakes in speaking is perfect, able to keep the whole body in check with a bridle. 3 If we put bits into the mouths of horses to make them obey us, we guide their whole bodies. 4 Or look at ships: though they are so large that it takes strong winds to drive them, yet they are guided by a very small rudder wherever the will of the pilot directs. 5 So also the tongue is a small member, yet it boasts of great exploits.

How great a forest is set ablaze by a small fire! 6 And the tongue is a fire. The tongue is placed among our members as a world of iniquity; it stains the whole body, sets on fire the cycle of nature,2  and is itself set on fire by hell.3  7 For every species of beast and bird, of reptile and sea creature, can be tamed and has been tamed by the human species, 8 but no one can tame the tongue—a restless evil, full of deadly poison. 9 With it we bless the Lord and Father, and with it we curse those who are made in the likeness of God. 10 From the same mouth come blessing and cursing. My brothers and sisters,4  this ought not to be so. 11 Does a spring pour forth from the same opening both fresh and brackish water? 12 Can a fig tree, my brothers and sisters,5  yield olives, or a grapevine figs? No more can salt water yield fresh.

One of the great strengths of the church throughout the centuries has been its faithfulness to seeking to ensure that there are appropriately authorised teachers of the faith. The dark side of this has been that the various denominations have not taken seriously enough the need to be reconciled one with another and so the authenticity of the Christian faith has been tarnished. Christianity is not alone in this. One of the great tragedies of the modern world is increasing fragmentation of the teacher/disciple relationship. This breakdown applies not only within religious traditions between religious traditions but also within our universities.

It is a truism to state that all of us, especially those in public life, should heed James’s advice about the tongue. To me the root cause of what I’ve mentioned above in terms of faith traditions and the state of public debate in our current society, is a lack of reverence for truth. 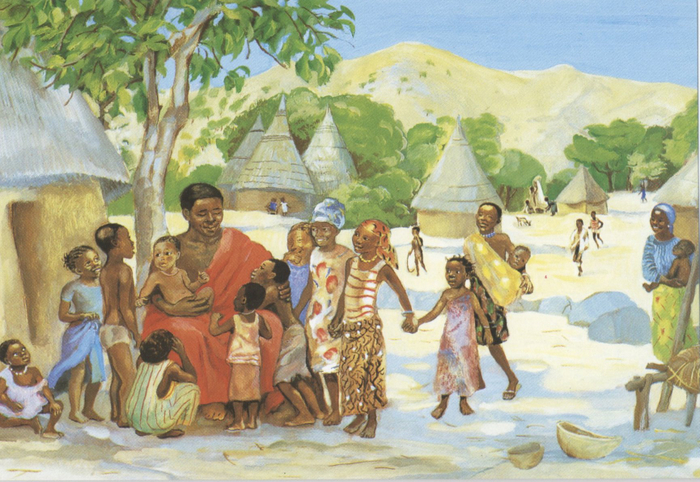 They went on from there and passed through Galilee. He did not want anyone to know it; 31 for he was teaching his disciples, saying to them, “The Son of Man is to be betrayed into human hands, and they will kill him, and three days after being killed, he will rise again.” 32 But they did not understand what he was saying and were afraid to ask him.

Who Is the Greatest?

33 Then they came to Capernaum; and when he was in the house he asked them, “What were you arguing about on the way?” 34 But they were silent, for on the way they had argued with one another who was the greatest. 35 He sat down, called the twelve, and said to them, “Whoever wants to be first must be last of all and servant of all.” 36 Then he took a little child and put it among them; and taking it in his arms, he said to them, 37 “Whoever welcomes one such child in my name welcomes me, and whoever welcomes me welcomes not me but the one who sent me.”

One of the great modern Archbishop’s of Canterbury, Michael Ramsey said that the whole of Scripture needed to be seen in the light of Jesus death and resurrection. This means both the old and the new Testament.

Jesus prophesying of his death and resurrection, is central to our understanding of it. We like the disciples still wrestle with why, as Jesus said to the disciples on the road to Emmaus after he had risen from the dead:

“Oh, how foolish you are, and how slow of heart to believe all that the prophets have declared! Was it not necessary that the Messiah should suffer these things and then enter into his glory?” Then beginning with Moses and all the prophets, he interpreted to them the things about himself in all the scriptures.”  Luke 24:25-27 NRSV

Experiencing Jesus death and rising to new life, is at the heart of our faith journey.  Every time we share in the Eucharist, “For as often as you eat this bread and drink the cup, you proclaim the Lord’s death until he comes.”  we proclaim Christ crucified.  It is in this proclamation that all the distorted values of wealth, and power in this world and in ourselves, are challenged.  The rich need to become poor, the powerful, servants of all.

Jesus death and resurrection are the beginning of a new creation, where the whole of life is being transformed in the coming of God’s Kingdom.  It is in the way of the child, the inner child that we find this new creation freed from the demonic powers and all that continues to corrupt human life.

Some further Texts illustrating Jesus prophesying of his death and resurrection:

“Then he began to teach them that the Son of Man must undergo great suffering, and be rejected by the elders, the chief priests, and the scribes, and be killed, and after three days rise again.”  Mark 8:31 NRSV

“they will mock him, and spit upon him, and flog him, and kill him; and after three days he will rise again.””  Mark 10:34 NRSV

“From that time on, Jesus began to show his disciples that he must go to Jerusalem and undergo great suffering at the hands of the elders and chief priests and scribes, and be killed, and on the third day be raised.”

“As they were coming down the mountain, Jesus ordered them, “Tell no one about the vision until after the Son of Man has been raised from the dead.””

“As they were coming down the mountain, Jesus ordered them, “Tell no one about the vision until after the Son of Man has been raised from the dead.””

“and they will kill him, and on the third day he will be raised.” And they were greatly distressed.”

“then they will hand him over to the Gentiles to be mocked and flogged and crucified; and on the third day he will be raised.””

“But after I am raised up, I will go ahead of you to Galilee.””

“saying, “The Son of Man must undergo great suffering, and be rejected by the elders, chief priests, and scribes, and be killed, and on the third day be raised.””

“And the fact that the dead are raised Moses himself showed, in the story about the bush, where he speaks of the Lord as the God of Abraham, the God of Isaac, and the God of Jacob.”

Scripture Text from the NRSV